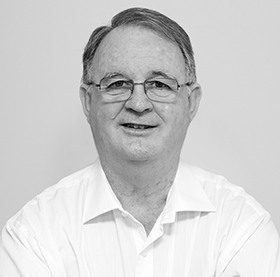 Alan Spiers has over 35 years’ experience as an estimator in the construction industry where he has worked on multi-disciplinary major infrastructure projects ranging in value from $100,000 up to $5 billion plus.

Alan offers vast estimating experience at a senior level, including management, with extensive experience in all forms of civil works, subdivisions, mining works, rail, airports, water and waste water plants. He is able to develop first principle estimates for all phases of a project from strategic and options analysis through to business case and final detail design. He also has the necessary skills to review estimates and can provide a robust review process to an estimate.
Alan joined Project Support in 2009 as National Estimating Manager, which has since merged with RMG in early 2019. He has significant independent estimator / commercial advisor experience proven over 50 alliance/ECI style contracts. Reviews estimates and evaluates for adequacy and risks. His ability to lead and manage large multidisciplined estimating teams and projects ensures project delivery through strong communication, reporting and stakeholder engagement skills meeting key milestones and budgets.
Alan’s main role is responsibility for allocating estimating resources and reviewing all major estimates to ensure consistency across Project Support’s estimating processes. These projects number into the hundreds and cover all major sectors for transport, infrastructure, water projects and resources sector including mining and rehabilitation works.

Alan has worked all his career based in Brisbane and started working on-sites through the 1970’s as initially an Engineering Surveyor before accepting more challenging roles in civil engineering supervision and management in a number of smaller companies. Alan then joined the Macmahon Group in 1980 as an estimator and worked in the Brisbane office on a variety of civil projects until Macmahon closed the office in 1993. From 1993 to 1998 Alan worked for a bulk earthworks contractor on the Gold Coast as Estimator and Contracts Manager. In 1998 Alan accepted a position of Senior Estimator with Civdec Constructions and in 2008/2009 was promoted to Estimating Manager. Since late 2009, Alan has worked with Project Support as the National Estimating Manager for the last 10 years.

Alan is certified as an Engineering Survey Technician, through the Darling Downs Institute of Advanced Education.